Breaking News
Home / NEWS / Why did it have to take Kennedy Agyapong to do house cleaning for us? – Agyinasare to Pastors

Why did it have to take Kennedy Agyapong to do house cleaning for us? – Agyinasare to Pastors 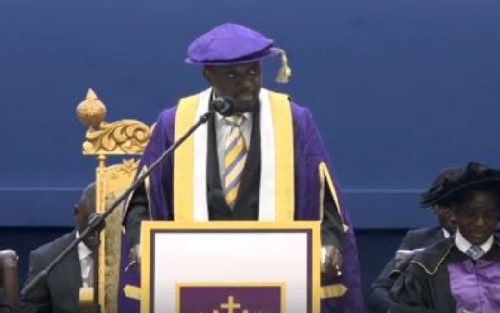 Bishop Charles Agyinasare, the leader of the Perez Chapel International

• He has backed Kennedy Agyapong’s campaign against false prophet

Bishop Charles Agyinasare, the leader of the Perez Chapel International has wondered why it had to take member of Parliament for Assin Central, Kennedy Agyapong to raise awareness about the activities of some persons he perceives to be a false representation of word of God.

In a sermon, Charles Agyinasare said he has been ‘provoked’ by the activities these ‘false prophets’ who in his wisdom are dimming the light of genuine men of God who are winning souls for the kingdom of God.

He said the actions of these charlatans poses threats to the Christianity and must be dealt with before it is too late.

Charles Agyinasare also narrated the modus operandi of these ‘false prophets’ and charged them to desist from such act.

“And some of what these prophets do. They have a woman in the Eastern Region somewhere and a her duty is to train people like they are sick. They will go and see this woman and she will give them a bus load of people and they will come to the church and pretend they are sick and receive healing. After that they will receive 150million cedis, he said.

Kennedy Agyapong has been on a campaign against ‘false prophet’ with Reverend Obinim and Prophet Nigel Gaisie falling victim to his crusade.

On Net2 TV, Kennedy Agyapong has made a number of revelations and allegations against some supposed men of God.