Good News To All Nabco Trainees

Good News To All Nabco Trainees

Following clearance by the Ministry of Finance for 11,840 staff to be employed permanently to augment their existing staff strength at various Ministries, Departments and Agencies(MDAs), the government has hinted at absorbing more employees National Builders’ Corps (NABCO).
Read also!

“Already, the government has absorbed half of NABCO trainees. The objective now is that every NABCO person will be made permanent in his or her place of work with this new directive from the government”, Deputy Minister of Finance, Hon. John Kumah announced.

In six separate letters, four to the Interior Minister (for Police, Fire Service, Immigration and Prisons Service) and the remaining two to the Education and National Security Ministers confirming the clearance to employ staff members, the Finance Minister indicated that the effective date for the people to be recruited will be 1st of August 2021.

“It was part of the Akufo-Addo government to give the unemployed youth jobs. It is an indication that Ghana’s economy is doing better amidst of Covid-19”, Hon. John Kumah told the host, King Edward, during a telephone conversation. 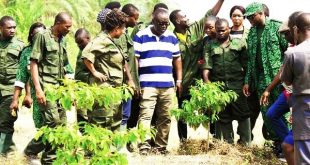