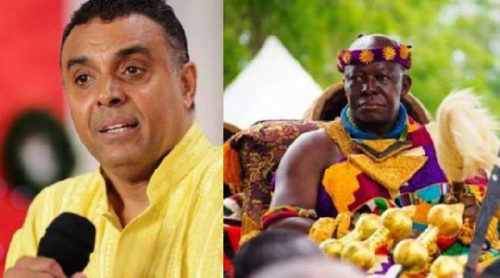 • In an apology letter issued by the Bishop, he states that the said audio was recorded 20 years ago and has been taken out of context

Among other things, the popular Bishop allegedly described Otumfuo’s reign as being useless and unbeneficial to his subjects.

In a letter dated June 16, 2021, and signed by the Bishop, it stated that the statement captured on tape was made nearly 20 years ago and is now being circulated out of context by some individuals with malicious intentions.

“I am deeply saddened that a message I shared at a conference nearly 20 years ago has been taken out of its context and circulated by persons who have previously declared that they will maliciously cause our churches in Kumasi to be closed down,” portions of the apology letter read.

While apologizing for the statements, the Bishop in his letter admitted that Otumfuo over the years has indeed had a positive effect on his subjects through his reign.

Despite the admission of fault and the issuance of an apology to the Otumfuo by Bishop Dag, some social media are registering objections to the apology letter.

The objections raised include what some see to be loopholes and inconsistencies between the contents of the audio and the justification given in the letter.

Considering that Nana Otumfuo Osei Tutu ascended his throne some 24 years ago, some social media users have pointed out that the claim by the Bishop indicating he made the statements about 2 years into the reign of the Asantehene holds no water.

“Snake oil salesman says what? The King was enstooled in April 1999 so the so-called nearly 20 years doesn’t change anything. Shame on you Bishop Dag Haward Mills,” a Facebook user with the name Asem Beba Dabi shared.

Others have also pointed out that the funeral of the mother of the Asantehene was held in December 2017 – three years ago.

“All I can say is that Otumfou’s Mum (the late Nana Afia Kobi Serwaa Ampem, Asantehemaa) did not pass nearly twenty years ago, neither was her funeral done during the same period. I find paragraph 3 of this letter rather interesting given some unsavoury comments we have seen on these streets intended to impugn the reputation of His Royal Majesty, Otumfour Osei Tutu II,” George Sarpong wrote in a Facebook post.