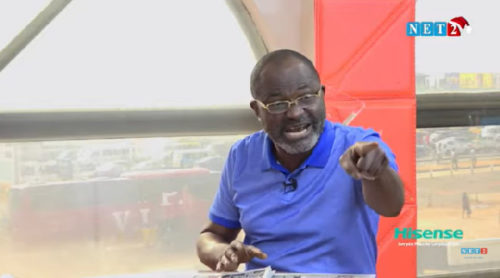 UPDATE: The Ghana Police has indicated that it is unable to respond to the allegations because the one who alleges should be able to prove it. The Service also says it is also unable to provide updates on the Ahmed Suale matter because it is still a pending issue.

• Since the killing of investigative journalist Ahmed Suale, Kennedy Agyapong has been accused of being behind the killing

• The legislator has, however, for the first time, mentioned the name of someone who lives in the Ashanti Region, as the actual killer, citing the police

Kennedy Agyapong has mentioned the name of someone he alleges to be behind the killing of an investigative journalist and a former member of the Tiger Eye PI team, Ahmed Suale.

According to the Member of Parliament for Assin North, one Ansu Gyeabour, a resident of Kumasi, is allegedly the killer of the journalist.

He explained that he got this information from the police after they assured him that he had been exonerated in the matter.

Since the killing of Ahmed Suale in January 2019, Kennedy Agyapong has been linked to the act, owing to the fact that not long before the gruesome murder of the journalist, he had mentioned Ahmed’s name as one of the people working with Anas.

Reports say he was shot dead near his family home in Accra.

The BBC reports that, when Tiger Eye aired its latest investigation, which exposed widespread corruption in African football, Ghanaian MP Kennedy Agyapong began a campaign of hostility against the team, saying he was offended by its undercover methods. He called publicly for Anas to be hanged.

Weeks after the film was screened, in June last year, he used his own TV station to attack Hussein-Suale and exposed the journalist’s most closely guarded secret – his face.

“That’s him,” said Agyapong, as images of Hussein-Suale appeared on the screen. “His other picture is there as well, make it big.”

Agyapong revealed Hussein-Suale’s name and the neighbourhood he lived in. “If you meet him somewhere, slap him… beat him,” he said. “Whatever happens, I’ll pay.”

But, speaking on the accusations of murder against him during an interview with Adinkra TV, New York, the Assin North MP said he had been exonerated. He spoke in Twi.

“Why is it that when someone kills a police, within three days, the person is caught? When a Ghanaian kills another citizen who is not a police personnel or part of the security agencies, the person is never arrested. Why? That is why I am saying that when I go, my Committee [Committee on Defense in Parliament] will invite the minister.

“And I have a typical example of Ahmed Suale when I condemned Anas, the person who killed him is in the Ashanti region. The police briefed me themselves that I am exonerated and that they don’t know why this thing happened and that I should stay away but I insisted, ‘how do I stay away when Anas, that thief, that murderer mentioned my name to the extent that a Congressman reported me so much that when I got to Houston in 2019 November, I was stopped that I had killed Ahmed Suale’.

“And then today, you have the report, you know. And the most painful aspect is that they told me that I should have patience and that the guy [suspected killer], whose name is Ansu Gyeabour – today, you are privileged, you are the first because it enrages me. I say he is in Kumasi. Yes! Yes! Ansu Gyeabour, and the police have shown me his pictures, asking me to be patient, for over one year yet my name is out there,” he explained.